Photo documentation of Coleman and other brand lantern globes

This section of the ICCC website is dedicated to one of our members, Darren Bentz, who sadly passed away at a relatively young age on March 3 2016. The pages have initially been recreated pretty much as Darren had left them. Over time we will be collecting pictures of the globes to make the archive complete, and we will add new information and edits as we go. Thank you Darren for all your past efforts, we hope that collectors from around the world can continue to benefit from the work you did recording globe data and images.

“Darren was a great collector and a friend of all who collected Coleman. He sent me many globe masks… and always included extra. He designed many of the last few years ICCC globes… and he documented the history of when globes were changed and the different styles used so others could learn. We in the Coleman Collecting Community have lost a good friend. RIP Darren. You will be missed.” James ‘Smitty’ Smith, President ICCC

This might help you differentiate USA vs. Canadian globes (thanks to Steve Retherford, Agostino Del Coro)

Three variations of this of this are known.

There is also a straight sided 242 size sandblasted logo as well, unknown if Canada and USA both used this same style.

There are also some small belly or embossed  globes made in a mold that have Coleman lettering in the casting, it seems all of this style found to date are cracked, it appears this style could not take the heat.

For USA made  lanterns it is printed “Pyrex Made in USA” on the back side of the globe.

For made in Canada lanterns it only says “PYREX” on the back side and originally had a paper sticker that said Made in USA on these.

The 355 lamp globes  are marked in the very same way as the lantern globes from this time period, most of the paper stickers are long gone today.

For USA made lanterns it has a sunshine logo on the front and says “PYREX Made in USA ” on the back.

For Canadian lanterns it has the same sunshine logo on the front with “Made in USA”  right under it and nothing on the back side.

Again 355 lamp globes are marked in the very same way depending on country of origin.

As for the early pale green letter 660 sunshine logo globe, the ones seen all say “Made in USA” under the logo on the front, whether Canadian or USA made.

From late ’62 until mid ’64 Canada still had green lettering BUT this lettering is not the old faint green of the past this is a much better bolder print in a bolder or brighter color as well. Found on Canadian 200 236 237 220

Around late ’64 Canada switched from green to red logo but used the same bold print design as the prior couple of years. Also seen on USA 236 and 237 in the late ’60s. After early ’69 they moved to the red parallelogram logo already in use by USA and discontinued the sunshine.

Examples of the above globes, click to enlarge an image; 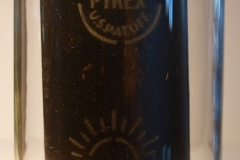 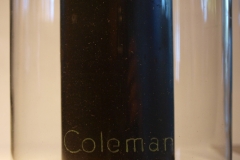 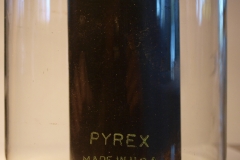 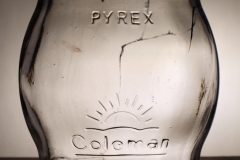 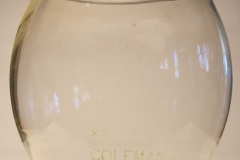 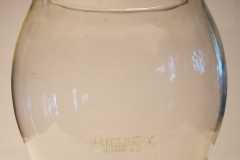 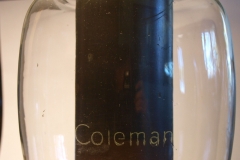 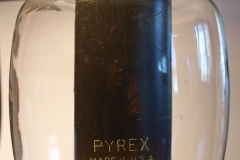 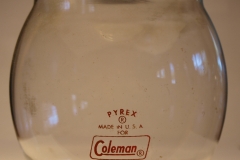 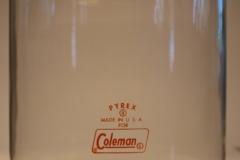 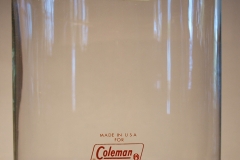 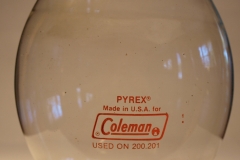 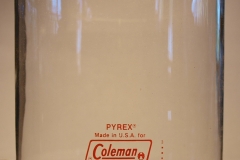 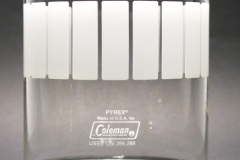 The No. 660 size globes don’t appear to follow the normal timeline. If you have any information on the US or Canadian globe timeline please send me whatever data you have.

The 1983-2015 timeline is a catch all for the newer globes. It’s a work in process trying to get the different globes dated and this should not be interpreted that the globes in this timeline were produced for all of those years. It’s intended as sometime between 1983 and 2015.
If you have a globe that’s not shown on this site and want to submit a photo please use the contribution form to send the information.

You’ll notice that on the photo credits some include a dot (•) after the contributors name. This is my notation of what globes I have in my collection. I do this to respect to the original contributors instead of replacing their photo with one of my own. I appreciate all of the photo contributions to the site and leads to new globes.

↑
We use cookies to ensure that we give you the best experience on our website. If you continue to use this site we will assume that you are happy with it.Ok