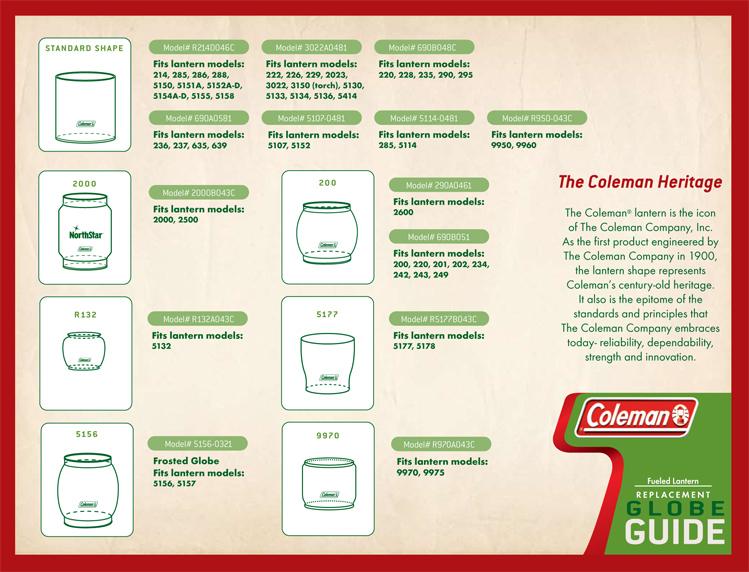 How to Document Your Globe Collection.

As my collection grew I had to come up with a way to document what globes I have and keep track of other globes I’d seen and wanted. I ended up developing a list, exported from a spreadsheet, that I could reference while shopping to quickly determine if a particular globe was needed or not. Pretty much up to the end of the “Curved PYREX” globes there wasn’t a lot of variation but the newer globes have many different variances with the logos.

The format I document the globes looks like this:
GLOBE~MADE IN GERMANY FOR~LS~GLOBE NO. 290B042~0107
The tilde’s (~) indicate the start of a new line. I used the tilde because other punctuation was used by the spreadsheet and caused formatting problems. I categorized the Coleman parallelograms as SS, LS, and LO. The first character indicates if the line under Coleman is Long or Short. The long lines start under the “C” in Coleman and extend to the right side of the parallelogram. The short line is only under the “oleman” in the Coleman lettering. The second character indicates if the lantern graphic is Solid with the lantern image clear or if it’s an Outline with the lantern also shown as an outline. I also have columns in my spreadsheet indicating if the logo is red or white, the globe size and any notes like if it’s a stripe frosted globe.
Alternatives for Hard to Find Globes.

Some globes can be pretty difficult and/or expensive to replace so if you break one or want to keep the original globe safe you can try out these alternatives.

Thermos #701 globe. – The Coleman #5156/5157 is a fully frosted bulge globe that can be used on lanterns that normally take a Thermos #701. Also the Coleman #5177, it’s more like the original Thermos globe because it’s tapered and clear, will also work. With both of these alternatives you might have to slightly file down one of the pins that the Thermos vent locks onto. You might be able to use a Coleman #4, 286/288, globe for the thermos also but it would require more filing of the vent pins. For reference the Thermos #701 globe is very close in size to the Coleman #990 but the 990 is much harder to find and usually a lot more expensive.

Coleman #4 globe. – Any lantern that takes a #4, 286/288, size globe and is a “cageless” design can use a Coleman #5156/5157 globe. These are the fully frosted bulge globes and using one of them really dresses up a lantern plus the soft lighting is much easier on the eyes. With any frosted globe be sure to check your mantles often because a hole in one will mess up a globe in no time at all.

Coleman #990 globe – Since it’s basically the same size as the Thermos #701 globe just use the alternatives listed for the #701.

Contrary to the Coleman Globe Reference Guide the #990 globe and the #5107 are not even close to being the same size. Don’t waste your time or money.

If you know of any other alternatives please let me know and I’ll pass it along to everyone else.